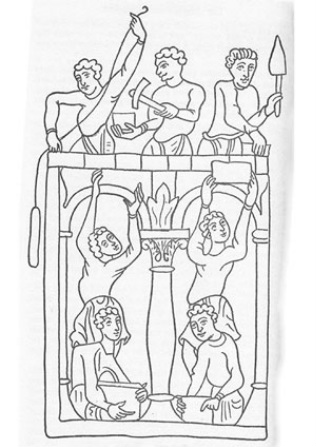 Masonry (or Freemasonry) is the oldest fraternity in the world. No one knows how old it is because the actual origins have been lost in time. Probably, it arose from the guilds of stonemasons who built the castles and cathedrals of the Middle Ages. Possibly, they were influenced by the Knights Templar, a group of Christian warrior monks formed in 1118 to help protect pilgrims making trips to the Holy Land.

In the Middle Ages, the term “freemason” was awarded to highly skilled stonemasons who were hired as free agents to build castles and cathedrals in England and Scotland. Because of the inherent danger of their work, stonemasons formed local organizations, called lodges, to take care of sick and injured members as well as the widows and orphans of those who were killed on the job. Eventually, men who were not skilled stonemasons wanted to join the group for the many advantages it offered. These men were known as accepted masons rather than working masons. This is how the group began to shift from a craft guild to a fraternity.

The first Grand Lodge* of Free and Accepted Masons was established in 1717 in London. In 1718, English Freemasonry spread to France and Spain, and after 1729, to India, Italy, Poland, and Sweden. Freemasonry spread to other parts of Europe and eventually made its way to the American colonies. In 1733, the first American lodge was established in Boston, under the authority of the Grand Lodge of England. The United States now has grand lodges in all 50 states and the District of Columbia. In Canada, there is a Grand Lodge in each province. Local organizations of Masons are called lodges. There are lodges in most towns, and large cities usually have several. There are about 13,200 lodges in the United States.

*A Grand Lodge is the administrative body in charge of Masonry in some geographical area.

Masonry has been an integral part of California for more than 150 years. During the Gold Rush of 1849, thousands of settlers came to California in search of fortune. Many of these men were Masons and brought with them Masonic values and traditions. Not surprisingly, some of California’s first Masonic lodges were established in the mining towns of the Gold Country. In 1850 - the same year that California became a state - the Grand Lodge of California was established in Sacramento.

Within 10 years, the number of Masonic lodges in the new state had grown from 11 to 130, while membership soared from 258 to more than 5,000. Over the years, the Masons have played a key role in shaping the history of California. To date, 19 California governors have been Masons, and at least four California Masons have been elected to the U.S. Senate. Today there are more than 60,000 members and about 340 lodges, making the Grand Lodge of California one of the largest in the world.

If Masonry started in Great Britain, how did it get to America?

In a time when travel was by horseback and sailing ship, Masonry spread with amazing speed. By 1731, when Benjamin Franklin joined the fraternity, there were already several lodges in the Colonies, and Masonry spread rapidly as America expanded west. In Addition to Franklin, many of the Founding Fathers; men such as George Washington, Paul Revere, Joseph Warren, and John Hancock, were Masons. Masons and Masonry played an important part in the Revolutionary War and an even more important part in the Constitutional Convention and the debates surrounding the ratification of the Bill of Rights. Many of those debates were held in Masonic Lodges.

The word "lodge" means both a group of Masons meeting in some place and the room or building in which they meet. Masonic buildings are also sometimes called "temples" because much of the symbolism Masonry uses to teach its lessons comes from the building of King Solomon's Temple in the Holy Land. The term "lodge" itself comes from the structures which the stonemasons built against the sides of the cathedrals during construction. In winter, when building had to stop, they lived in these lodges and worked at carving stone.